This working pattern for the ‘Bound Heart’ Lovespoon has emerged from a collaboration of design responses and requested changes, through a couple of iterations, to arrive at the current working pattern. I have often done a fairly detailed rendering, even in the early stages of a design, where a rough sketch would have been more sensible, because of  likely changes.

One reason in justification of this is, I find the drawing and rendering of a design is a useful exercise and I am enabled by the slowed-down-drawing process to think through how, the actually carving of particular elements, might feel during the work and how their form might appear in the end. The later-to-be discarded elements and details would then have been ‘experienced’ sufficiently in doing a finished drawing, to become part of my design vocabulary for later use. 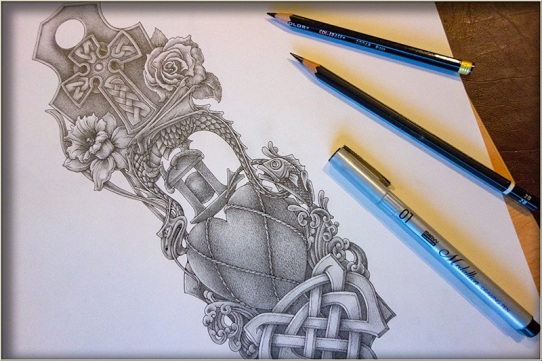 However as I draw and render the pattern I can’t help but feel it is starting to partly take on the role of a finished drawing in its own right, even while I am still thinking of it as ‘just’ a pattern to carve from.

For more complex works especially, I am tending, even as I think about it now, to feel that the whole process involved in design and making is, as a whole package, the actual artwork, not just the finished artefact. That is not to say that the finished object is incomplete.

It is not incomplete, because all the other parts of the entire process, mostly intangible ones, are included in it and can be rightly inferred, from the finished work piece, though not observed. At the same time the few, more tangible, parts of the whole art project; like the sketches, drawings, photo collections and the step by step descriptions of the working progress, have an additional stand-alone potential and can be observed.

Now this is and has been always true of any artwork, crafted or made thing. Nothing new here. But in our still emerging ‘Information Age’ the intangibles that go with an artefact, the context, inspiration, impetus, processes and the ultimate presentation of them, can all the more easily be delivered as a whole package art project/work.

It is common, especially in Instagram, to see, not scans of graphic works in progress or finished work, but photos of them that include the brushes, pens pencils etc and sometimes the work location. A sketchbook page for instance isn’t scanned but photographed in situ. The ‘flat lay’ is the purpose built, designer version of these inter contextual graphics.

I enjoy seeing this kind of presentation  myself because of the context and ambiance that is included. It adds to the story of the finished work, and it might as well be included, and or considered a kind of derivative work.

The whole-work of a commissioned lovespoon carving, begins with the back-story of its commissioning, and then, as with any artwork, the story of materials used, workspace, tools, the cultural location of the carver and the carvings own location in tradition. Additionally the carver’s individual motivation, inspiration, influences and philosophy of making when published are a meaningful part of the whole the human author/maker may have very limited input into the perceived meaning of their work but the author isn’t exactly dead.

This ‘Bound Heart’ Lovespoon design, consists of a complex montage of elements that are meaningful in a family-history and emotional sense to its recipient. The brief requires, for the front of the lovespoon; The Welsh Dragon, a daffodil, a rose, a heart loosely bound by golden thread, Celtic knot-work, a Celtic cross, a caged ball and a puffin. The lovespoon is also to be art nouveau in style overall.

An additional aspect to the design comes from a feature in the selected timber blank for the lovespoon carving. There is a slightly open knot at about the centre of the timber piece. The story for the ‘Bound Heart’ involves a substantially healed, once wounded, now healthy heart. This heart is loosely bound with golden thread as if from the healing, and so the knot could well be a unique asset to the meaning, as long as no other problems eventuate from it. The selected timber piece is Japanese maple, a hard close grained timber similar to rock maple but a bit darker.

Rather than describe all the elements in the design, their meaning, arrangement and individual characteristics at this point. I will leave it to the detailed descriptions of them in the carving process as the work progresses.

In the next post I will describe the cutting of the carving blank, ready for the carving.