The Celtic cross, the daffodil and some unifying sculptural elements, in keeping with the art nouveau style adopted for this Lovespoon, are all the carved elements that remain to be completed on the front of the lovespoon. This will be the first time I have included the cross in any Lovespoon design. It is a Celtic Cross in this instance and together with the dragon and the daffodil, it signifies the Welsh heritage of the recipient. 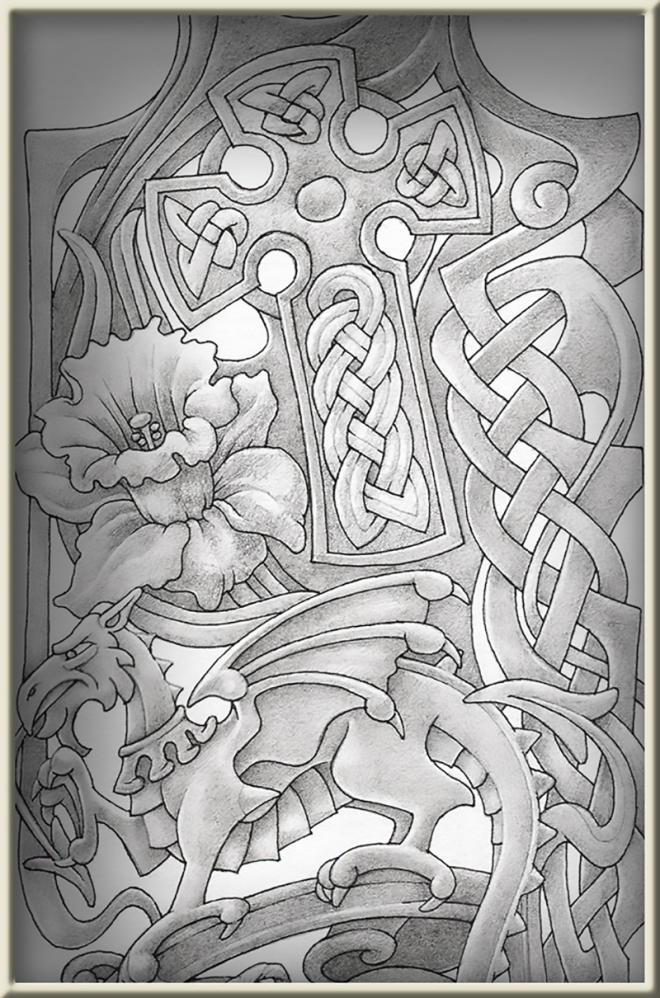 It was as a teenager in 1965 on a QANTAS staff -travel trip my father had organised for our family, back to his birthplace at Llantwit Major, that I encountered the Celtic knot-work on Celtic crosses for the first time. The crosses were displayed at the ancient St Illtud’s Church and made quite a visual impression. During a couple of other trips to Wales much later I don’t recall seeing much in the way of Celtic crosses at all, but the earlier experience does lead me to easily associate these monuments with Wales.

This file is licensed under the Creative Commons Attribution-Share Alike 2.0 Generic license

In his landmark book on Lovespoon carving, The fine Art of Lovespoon Carving David Western makes note of  ‘the scarcity of spoons that include the cross as part of their design’ (regarding historic examples).  And this occurring at a time when ‘the chapel figured so prominently in daily life’ Whereas – ‘the cross is a common feature on modern-day lovespoons’.

I feel I can almost answer the conundrum as a Christian believer myself, in that I would tend to instinctively avoid crosses in my designs unless specifically asked for. I am not against portraying the cross, just not in a vacuum without explicit explanation of its meaning. A key to the reticence on the part of those for whom the ‘chapel’ figured prominently, is perhaps that word chapel. The Calvinistic Methodists were at the forefront of the Welsh revivals. Reformed in their theology and keenly evangelistic, they would instinctively, I think, baulk at mere symbols in place of explicit explanation and invitation .

The meaning of the cross is death and life for the believer. Firstly death – Death of death itself – Death of real moral guilt – Final judgement completed – Passed over. Then everlastingly – Life – Life through forgiveness and reconciliation once-for-all – Into bodily resurrection, new heavens and new earth to come .

The form and orientation of the celtic cross motif on the lovespoon has been decided and its upper surface prepared for drawing in the knot work detail. The form of the cross is inclined slightly to the left and its long axis has a very slight curvature to the left. This is to maintain its relation to the slow serpentine curve along the axis of the entire design and in keeping with the general art nouveau style of the piece. 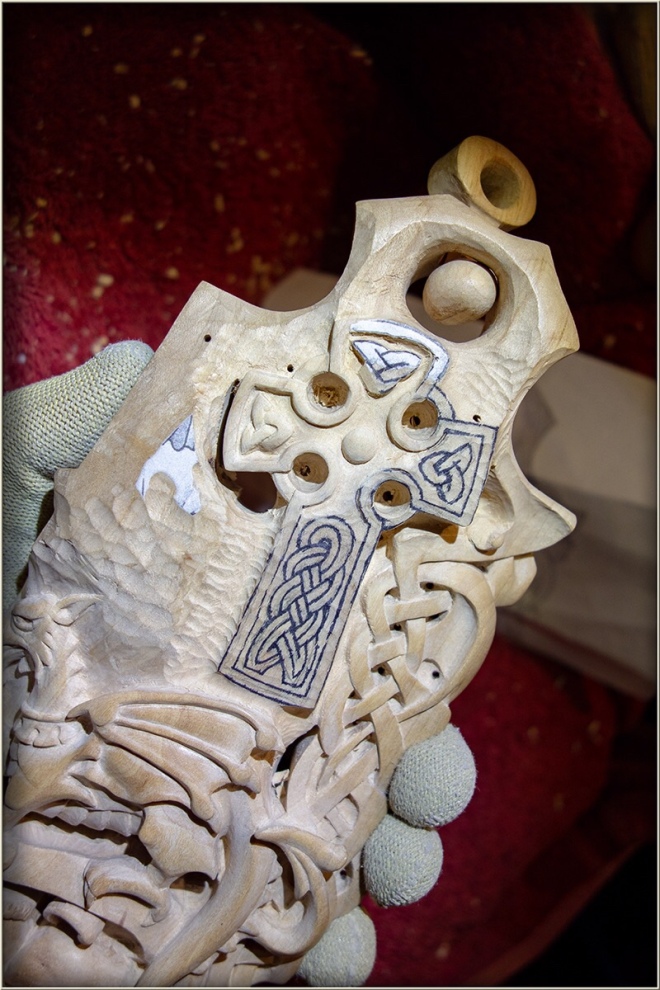 The celtic cross in this design is comparatively small and so the decorative knot work cannot approach the complexity of the real thing. So it needs to be simple enough to carve at this size but still give a recognisable impression of a celtic cross. The knots at the top and sides are ultra simple and in the one with the longer knot work I have attempted to give an illusion of complexity by making it double stranded. A border around the perimeter is meant to add to this effect. 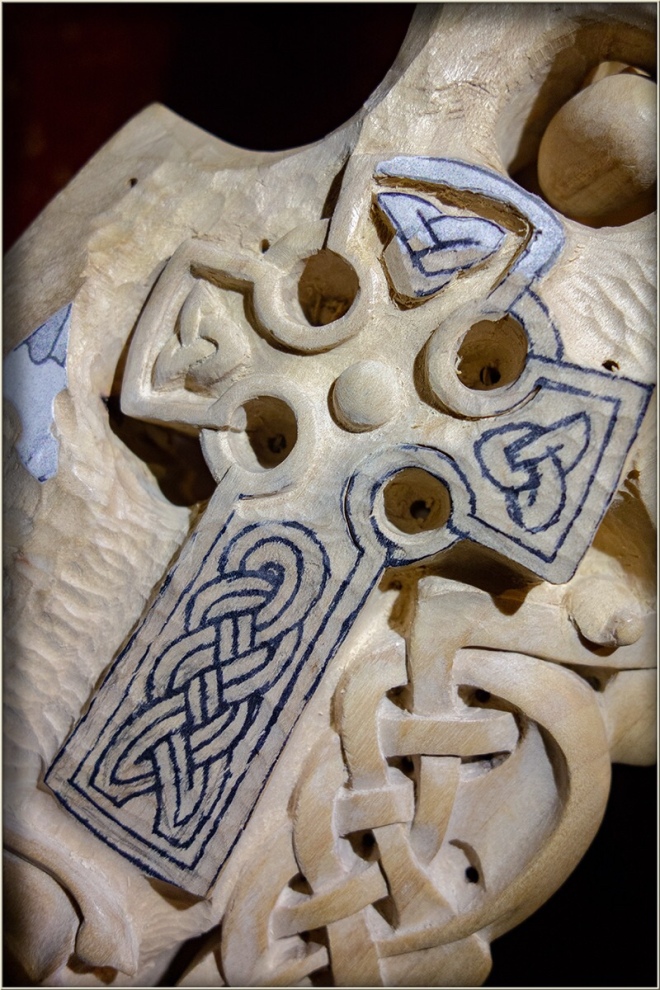 This Japanese maple timber has been very hard, as well as hard (tough) to carve but fortunately it holds detail well. The very narrow, in some places, areas that form the background to the decorative knot work can be deep enough to produce good shadow definition without compromising the integrity of the walls of the knot work and border. A bit of depth also allows for a very slightly domed effect on the background area for added visual interest.

Once these levels of cutting over the general form are established it is then just a matter of working the details to their completed form. The small micro chisels (shaped and sharpened music wire) accomplish most of this work, building depth slowly while handled with a pencil grip for fine control and naturally limited force.

A small cranked bend in these tools, which, incidentally can be added to or straightened-out-of the tool, facilitates deft cutting up to stop cuts at knot-work intersections and crossovers.

In the next post I will describe carving of the third typically Welsh signifying motif on this lovespoon, the daffodil.